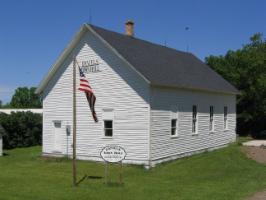 The Daniels Town Hall began as the church building for the North Sweden Lutheran Religious Society.  The society was organized at Gustav Anderson's house at Dunham Creek on June 28, 1882.  In 1885, the members agreed to meet with the Ansgarius congregation near Wood River, four miles east of Grantsburg; a congregation that was organized in 1875.

Upon merger, the congregation planned to build a church on Pehr Erick Anderson's land at Mud Hen Lake.  Apparently the merger either did not materialize or failed to last because the Swedish Lutheran group built their own church, knows as the Mud Hen Lake Lutheran Church on Mud Hen Lake in 1886.

Around 1892, the Swedish Lutheran group did join the Angarius congregation, and they eventually put up a church in Falun, an unincorporated area 1-1/2 miles to the west, in 1899.  The Swedish Lutheran building, which later became the Daniels Town Hall, was sold for $300, rather than being torn down.

According to information provided by the Burnett County Historical Society, the first record of a judicial election and annual town meeting for the Town of Daniels was April 2, 1907.  Daniel Johnson, the local assessor, was elected as the town chairman to work with two elected supervisors. Each supervisor received $1.50 a day for their service.  To this day, the people in the Town of Daniels gather once a year at the town hall for their annual meeting and to make decisions that can only be made by the residents of the township. That meeting is set by Wisconsin State Statute for the second Tuesday in April.

During the months between annual meetings, the township is governed by a board of supervisors consisting of a town chairman, two township supervisors, a clerk and a treasurer.  That form of government has existed for nearly 100 years, with the Daniels Town Hall as its center of operation. 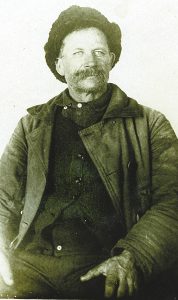 Daniel Johnson, the first chairman of Daniels Township and the man from whom the township name developed, came to the United States in 1880 from Dalarna, Sweden.  He was 23 years old at the time.  His wife, Johanna, 21, and her parents came over on the same ship.  Tow years later, Daniel and Johanna were married, and started farming in Section 22 of Daniels Township.

What a challenge it was for the early settlers to cut trees, grub stumps and build farm buildings, plus find a church, a school and a town hall.  Many times a log cabin home provided a meeting place for all three.  Eight years after the Johnsons were married, they lost four children to diphtheria in a deadly diphtheria epidemic.

Daniel Johnson was an organizer in developing answers to the needs of the community.  When he came to Burnett County, there were few roads.  Town records show that they could build a mile of road for less than $90, which probably consisted of cutting a mile of trees.

Johnson served as township assessor as early as 1890.  He received $62.25 for doing that during the year.  He served as town clerk in 1893. Walter Johnson recalls Daniel Johnson as assessor, coming to their farm to count cows and pigs in 1923, when Walter was six years old.

I recall the Johnsons as early as 1923, when I was six years old.  Daniel Johnson was town treasurer at that time. Eighty years later, I can still remember the aroma of freshly baked doughnuts in a warm kitchen, prepared by Mrs. Johnson, who shared them with me.

I grew up to know this good family in school, church and community. They were good friends and neighbors, and it pleases me to have known the "father" of Daniels Township and his gracious wife.